skip to main | skip to sidebar

Down here you can watch the last music video of Music for the defect, shot in 2009 by Bouke Mekel and Roeland Dijksterhuis. A final goodbye to all who supported MFTD throughout the years. But the music cannot be stopped. We are quite proud of this musicvideo. 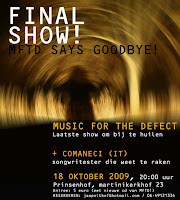 A while since I posted anything down here. MFTD went on after Marco left and was replace by Thijs (Karoushi) on drums since this summer. Which actually works out pretty well. We did a great gig at Noorderzon at the Hamradio container. All good stuff but here's some bad news... I am going to quit MFTD since I feel that this ain't working for me in this way anymore. Our last shows will be at the 10th and the 18th of october 2009. A pity, after so many years of fun and hard work. Anyone who knows me a bit also knows I will continue making music. But for now: Last show MFTD at the prinsenhof, martinikerkhof 23 in Groningen. Together with the lovely Francesca Comaneci from Ravenna, Italy. See does warm stuff sounding like mazzy star and the likes. At this final show we will also present our music video for "let this tension flow", done by Roeland Dijksterhuis & Bouke Mekel. Thanx to them for their blood, sweat & tears! Ok, the poster is up here (view to enlarge).

"Pushing the margins" finished & back from Italy 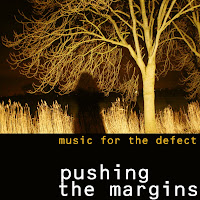 Lots of news here. Don't know where to start actually...
Music for the defect finished their recordings. It turned out to be a fine mix mainly of warm accoustic sounds. We called it "pushing the margins" and the cd contains 7 new songs. See artwork up here. Moniek did the photograph on the front-cover, the picture was shot during the first take of our video of let this tension flow (which isn't ready yet) . We are thinking of doing a cd release-party somewhere in Groningen after summer. We'll let you know... (for sale: 5 euro's)

We just returned home from a nice tour in Italy visiting especially the upper regions of Italy with Rome as an exception. The first show was at Tizio's (Bob Corn) festival (musica nelle valli). A very great festival. All great bands playing there! Just have been there two of three days but the variety and quality of the programmed bands was amazing! Just to pass you some names to listen to: Vialka, Jealousy party, Ichy, the Hand, My bubba and me, Comaneci etc etc etc.
Well just study the poster!

The second show was in Rome together with Callers (USA), at the fanfulla club. All shows we did with Callers, a very great band. Check them out! They got a great live performance going on and are all very skilled musical musicians. We were impressed by them every evening. A detail no to miss; Drummer Gus was in Spirit Assembly, an '90's emo band which I strongly admire, wow! After that we went to the sea side and did a very cosy, quiet and 'unplugged' show in a patio somewhere in Ravenna. Great ambience, nice audience, lovely people organizing it. Wow, this we really liked. In fact we have been doubting on doing all following shows in such a quiet fragile setting but we didn't. The day after we played a club in the beautiful town called Carpi. 14th century centerpart (square surounded by impressive architectural buildings with arches, palace and cathedral) on a hot sunny day. The concertplace was a great room. But it probably was too hot since a lot of visitors stayed outside, checking out the shows through the opened windows.
Parma was cancelled so we went up to Brunico near the Austrian border. A great place again. Shows outside under a roof and Bob Corn joined in as well. Nice last show for us. 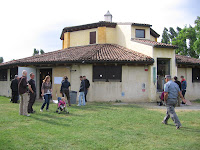 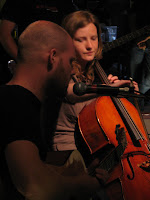 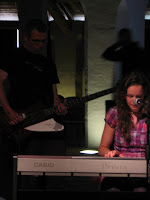 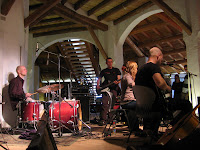 On the personal side; my two daughters and girlfriend came along on tour as well, which was a great experience. We bought a van just before the tour in which we all can sleep. With two kids touring gets quite an exhausting excercise (it already is without kids..) but I really loved it and so did they! Paul and Tascha of wotnxt were present as well, spending also two weeks in in Italie. So great, and it isn't even summerholiday yet! Ha, more fun to come. 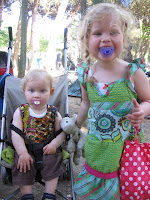 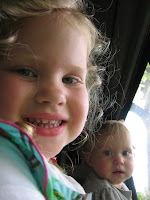 We will play some festivals as well this summer. Check out the showlist.
Some other thing, I just did some solo recordings in my kitchen and put them on a cd naming it Swantigkeit (sale: 2 euro's). Drawing and title by Uma Mare Olthof. 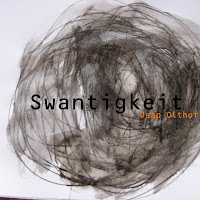 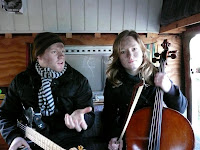 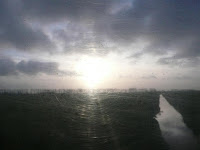 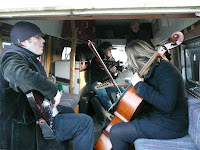 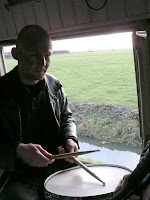 (pictures by our Moniek Steenbergen)
Hi!

Winter is over, time to let all stress flow.
We did and finished the final takes for the video for "Let this tension flow". It's in the process of editing and montage now. More video's of music for the defect in live 'action' our now on our myspace. The pilot show for "Psychodelic Birtday Party' is now finished and released. We did two songs in the TV show, "Grip" and "Emergency Call", still with Dorien on vocals.

It's time to get out on the road. We will do that in the end of may, heading to Italy for the first show on Tizio's festival @ San Martino Spino on sunday the 31st of May (see http://concertifooltribe.blogspot.com/) and then for a small tour through Italy.

Before that we will do some new recordings, probably so we can bring along a new cd again.
We'll keep you updated. 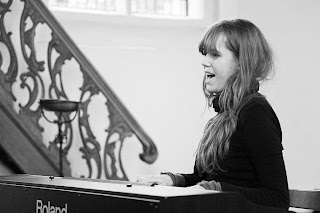 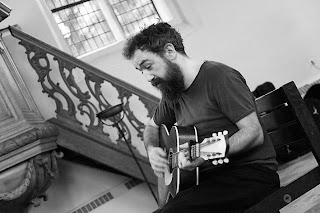 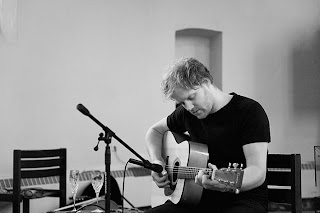 Last sunday, the 22th of february, we did a very great concert in our little village.
As you can see above; Merinde, Music for the defect and Bob Corn played at the show.
The ambience, in the small church (even to non-believers such as us) was very special. Quite a crowd showed up and all three performances were good in our opinion.
Thanks to Paul & Tascha for helping out! Thanks to Roland for the great pictures! 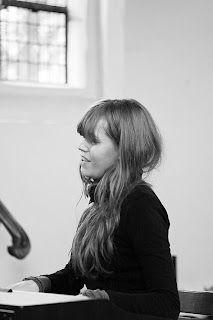 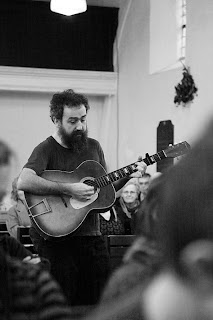 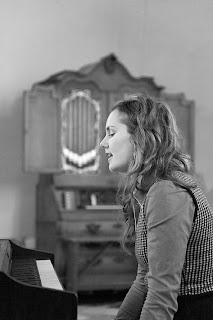 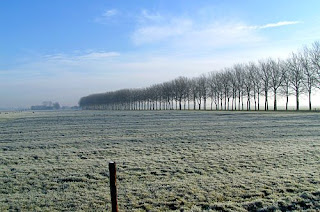 Music for the defect is working on a video for the song "Let this tension flow". Last saturday we did the first takes in the Groningen landscape. Bouke Mekel and Roeland Dijksterhuis are doing the filming. Beside that Walter does grime and Sjakie is driving us around in his van. We hope to show it to you in the near future.

At the 22th of february we are organizing a show ourselves. In the homevillage of Jaap, Winsum, at a beautiful church (not used for practizing religion anymore) in the historic center. Our good friend (Tizio) Bob Corn from Italy will perform and also female sing/songwritingMerinde (Arnhem). Quiet music, without amplification at a scenic set, what do want more.
Feel welcome to attend the concert, you might want to make a reservation... (jaapolthof@hotmail.com) It's a sunday afternoon matinee, starting at 14 hours.
Price: 5 euro's. See poster down here. 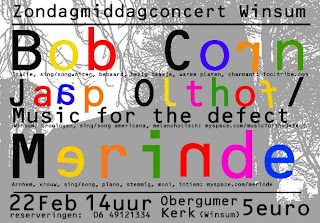 In the end of may and the beginning of june we will do a little Italy tour, thanx to mr Bob Corn! Dates will follow.

December is hitting in, still alive, still not frozen 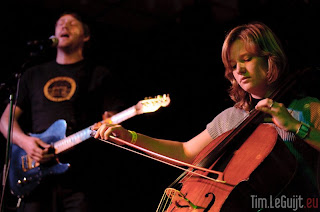 Music for the defect did a recording session for VPRO dwars last spring. They recently broadcasted some of the material in a MFTD special with interview. The interview (in dutch) itself isn't that interesting in my opinion, the recordings are done live. It's possible to listen to it through this link: http://www.vpro.nl/programma/dwars/afleveringen/39979252/

We also did some TV-recordings for a new critical, underground musicprogram called: Psychodelic Birthday Party. This is the child of SingSing studioboss Milan Ciric. It's a collaboration with the Friesland College. Several bands do live performances in the studio while the music is directly recorded and the performance is filmed. Imagine a musicshow somewhere between the intimacy of "2 meter sessies" and the diversity of Jools Holland. The idea is to shoot a good music program with fresh bands bringing something that wouldn't be catched up in the mainstream slick and money minded media. Anyway, there's a promo now, also on our myspace. More info is on their website: http://www.psychobday.nl/

At the moment we are working on new songs, doing some more accoustic stuff. Beside that we are invited by our good friend Bob Corn to come to Italy and do some shows there. We will also do some shows on the way in France. This all should take place in the end of May/ begin june 2oo9, we are looking forward to it! More news in the nearby future.

More about us / related items

you are blogging with me? 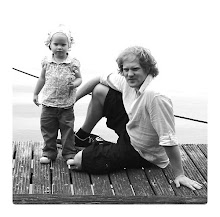 Jaap Olthof / Music for the defect